My quest is still the same. I’ve lost 3 pounds! Hooray. NOT! In the months since I started this blog nothing much has changed, I still have a 47 pound monkey on my back! Wait… maybe I’ve lost more than I think? I now have a titanium plate and screws which no doubt add a few ounces back. 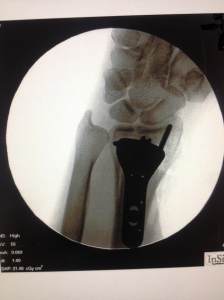 So there you have it. My excuse. My excuse for not writing (one-handed typing sucks) and for not getting on with this monkey business.

I know… how did I break my arm? Well, it’s kind of embarrassing, kind of funny and stupid, really really stupid. Of all the crazy things I’ve done in my life, I break it doing a pretty tame event and in a pretty lame manner. We were riding in the 5 Boros Ride in NYC. They close the streets to vehicular and pedestrian traffic and 31,000 folks ride bicycles through all 5 boros of New York. Wow! It was so fabulous and exciting for an hour or so!

Riding over the Bronx Bridge (only 10 miles into the 40 mile ride) I decide to take a photo using my iPhone while riding. I had been doing it all morning without incident. As you may or may not know, the Bronx Bridge is not the smoothest piece of asphalt in The City. While I’m lining up my shot, I drop my phone! What? In one fell swoop I lean forward to look for it, hit my front brake on my rented bike and boy, it BIT. In a flash I was over the handlebars and grinding on my forehead while kissing the bridge. I think I was embarrassed even before I hit the ground.

Immediately there’s a woman screaming “Rider Down!” and a dude jumps out into the sea of bikes and waves a flag. My husband and a woman are arguing about moving me or not. I told him to get me up and she screamed, “Don’t touch her!” I think she saw that I landed on my head. While I listen to them argue and my husband say in his Irish accent, “She’s my wife. I am a first responder, I’ll sort it!” I decided that I’d just get myself up! So I did. Everyone was gaping at my face. I knew my lip was bleeding and both lips felt fat. And wow, my left wrist felt numb. I grabbed my bike and said, “Let’s go!” Of course, nobody wanted me to go anywhere. “You need stitches,” they said. “It’s just a cut,” I said. “Uh, no it’s pretty deep, come on,” hubby said. I grabbed my bike and when I reached up with my left hand to grip the handlebars, I knew. I said, “Okay then.”

We talked to the volunteers to get our bikes returned to the rental place and my friend took a picture to keep this moment:

I did NOT want to ride in an ambulance. Haven’t done that yet, and it seemed silly when my feet worked fine. They said the hospital was a mere 2 blocks away. When I asked if it was a “good hospital” she smiled and said, “It’s a hospital!” We walked the two VERY big blocks in our silly helmets and bike clothes. We got a few interesting looks from um… some interesting fellows. As we finally got into the hospital I was amazed at the number of cops. Every twist and turn in the hallway showed another one or two. They could look up and down at least two hallways and see each other. Wow. “You’re not in Texas anymore,” I thought. I was right.